A couple of years ago, I joined in the Art Charm Exchange, a swap and auction organized by Jen Cameron to raise money for Beads of Courage. This year Jen decided to run it again (the last time she will do so), and I jumped right in to take part again.

Beads of Courage is a program based in the US, which enables seriously ill children to collect beads representing milestones and procedures. The organization behind it runs a number of different programs, including commissioning special beads to be made by artists each year.

Jen’s Beads of Courage Art Charm Swap is a benefit for Beads of Courage, involving a big group of jewellery designers and bead makers from the US and around the world. Each participant provides 11 art charms made with handmade components such as lampwork beads or ceramic, polymer or metal clay, or mixed media. One charm is kept aside to auction off on eBay, and the remaining 10 are distributed amongst 10 of the other artists.

The charm auctions were meant to start today, but Jen has run into a snag there and has delayed the auction while she works out the best way forward.

Each year, Jen chooses a theme for the charms, and this year it was Fairytales. I thought about various different things I could do but in the end, I kept coming back to the idea of a book. After a bit of a search on Etsy and Pinterest for inspiration, I purchased some little brass book locket charms that were exactly the right size, with a bezel on both sides when the locket was open. I also found some digital book covers I could use to embellish the lockets. So I got to work. First the covers were glued onto the lockets using mod podge, and covered with several more coats. I love how the brush I use to apply the mod podge gives the covers a texture. I had two different versions of the cover, one says Enchanted and the other says English Fairy Tales. 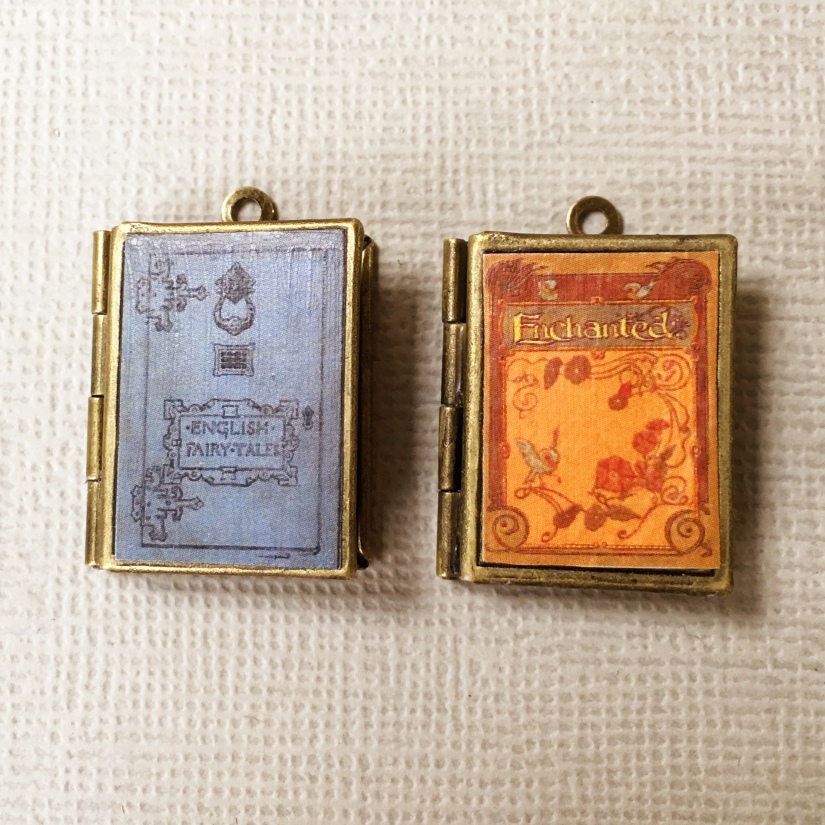 Inside the locket I glued a slip of paper with the words Once Upon a Time and Happily Ever After into the bezels and then used a small amount of ice resin to partially fill the bezels. I was careful as I didn’t want to overfill the bezels and I was a bit worried that the resin would flow into the innards of the locket and then out the corners, but it all worked just fine!

Finally I added a tiny key and a petite glass flower to the charms, and made sure they each had jump rings. Here’s a picture of the whole collection. 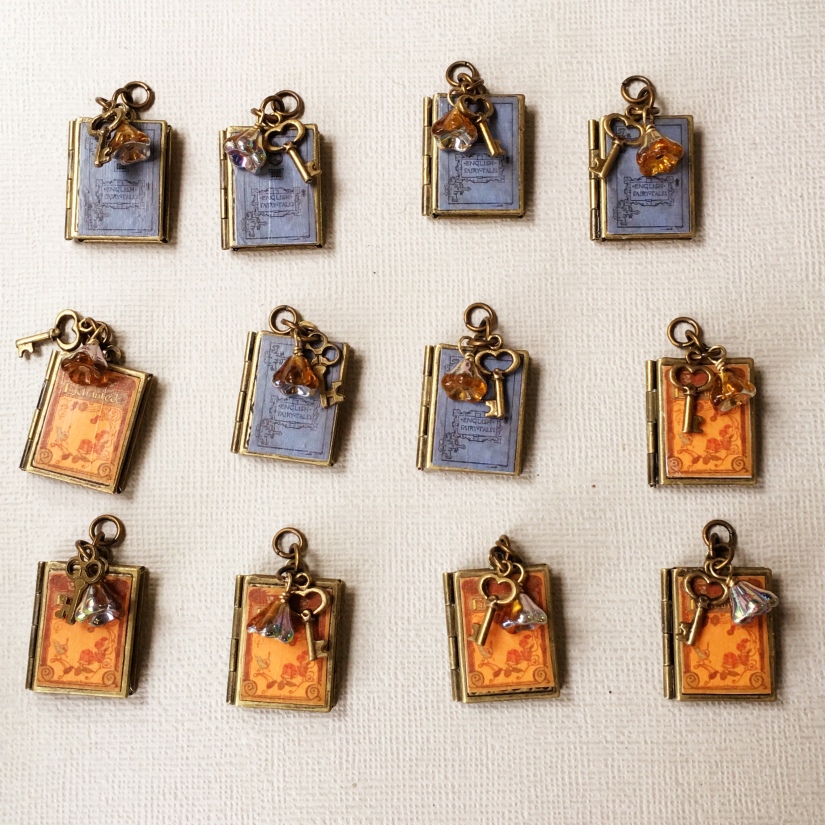 I sent them off and waited impatiently to receive my collection of charms back. I’ll post about what I received in a separate post, perhaps when the auctions go live. In the mean time, hop around to see what others made inspired by the fairytale theme.

This month’s challenge from Art Jewelry Elements focused on trees and autumn. My thoughts immediately went to the gorgeous tree pendants that Natalie Fletcher-Jones makes, with a design she carved herself a few years ago. She glazes them in a myriad of different colours and I have a couple of them in my collection, the one I eventually selected glazed in lovely dusky colours.

As I was shuffling through my beads to see what might work with the pendant, I came across a recent selection from The Curiosity Club in just the right combination of soft dusky pinks and purples to go with the necklace. Finished off with a leafy clasp, it has an autumnal feel to it. 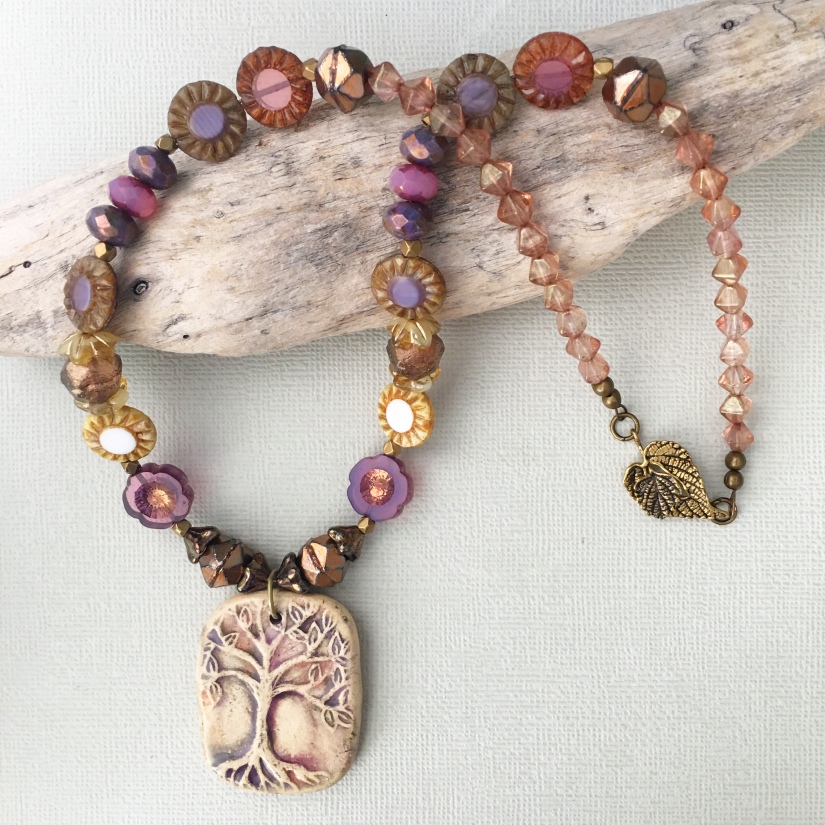 Thank you AJE for another great challenge! This is a blog hop, so if you have time, pop over and see what others have made:

A couple of weeks ago I put out a challenge to friends in the beading community to come up with designs inspired by the Olympic Games, which were celebrated in Rio in August. As I said then, I love the Olympic Games, it’s one of the few sporting events I avidly watch (along with the similar but smaller Commonwealth Games and the Winter Olympics). The Aussie team is huge (especially given we are a nation of only 25 million or so people) and usually brings home a few medals, mostly in various watersports like swimming, sailing, canoeing/kayaking, and rowing, and even a few athletics medals as well as random sports like shooting and equestrian events. But while the medals are nice, I just love seeing the camaraderie between athletes of all nationalities and the joy as they compete and win. The sheer athleticism of the gymnasts astounds me, the achievements of superstars like Michael Phelps and Usain Bolt is mindblowing, and I love seeing sports that I’m not familiar with (pingpong anybody? Or perhaps the Modern Pentathlon?). Even the team sports are fun to watch!

In my original post, I mentioned various things that could be used as inspirational jumping off points. I had lots of ideas, such as a metal piece echoing the graceful lines of a gymnast in mid-flight, but sadly I had neither the time nor the metalwork skills to pull that one off! So I went in a different direction.

As a self-confessed colour lover, I was very drawn to the colours used by the Rio Olympics in their logos and branding—vibrant hues of bright blue, orange, yellow and green, in organic, swirling graphics.

I decided to feature those colours in a lariat style necklace. The lampwork beads come from Beatlebaby Glassworks, and they’ve been sitting in a drawer for a couple of years awaiting the right project. The necklace itself is very simple, with the beads strung along a length of 3mm wide chocolate brown deer hide leather, and it can be worn in several ways—wrapped around the neck or even around the wrist as a bracelet. 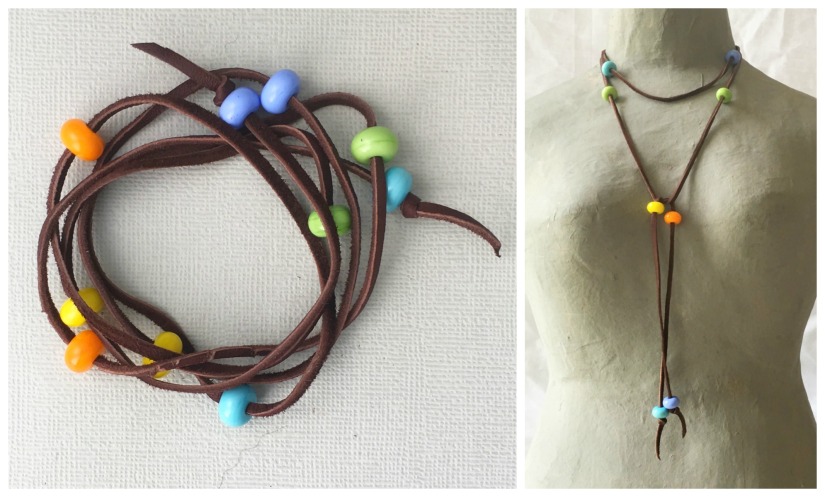 When I was digging out the beads I used above, I found another set of beads—little rings in translucent frosted glass—from the same bead artist, and these made me think of the Olympic Rings, a symbol that above all others says Olympic Games, although they are completely the wrong colours! I used slightly wider deer hide leather in black to string them in another lariat-style necklace. It’s very comfortable to wear! 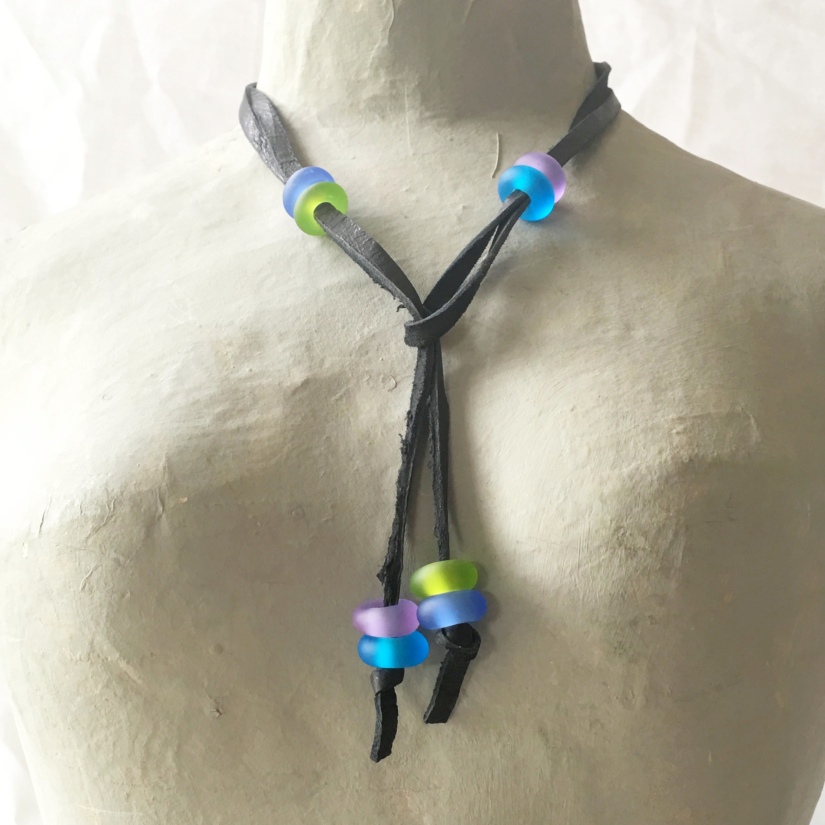 Oh yes, and later this week the Paralympics start—have you ever watched them? The athletes are simply amazing, and many of them have overcome the most incredible of challenges to reach the Olympics. It’s worth seeing if it is showing on TV in your area.

A couple of my jewellery-making friends have joined me in this little challenge, so if you have time, go and see what they made! 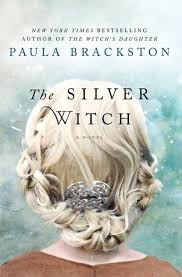 This month’s book for the Inspired by Reading Book Club was The Silver Witch by Paula Brackston, a lovely novel which weaves together the stories of Seren, a witch and shaman from Celtic Wales, and ceramic artist Tilda, who has moved to a cottage near a Welsh village after her husband’s death. As Seren and her Prince’s lives are increasingly threatened, Tilda discovers she has powers of her own, and an ancestral connection to Seren and the nearby lake.

The book features a pretty spectacular piece of jewellery, a golden torc engraved with Celtic designs of a hare and a dog. Sadly it’s not something I could easily make, so I looked instead at Tilda, a potter who creates beautiful ceramics. The pieces she creates when she moves to Wales are decorated with Celtic patterns as well, and this is what inspired me.

I chose a pretty ceramic pendant by BluMudd (sadly, Moriah isn’t making beads anymore) featuring a Celtic pattern in pretty shades of aqua greens and blues, reminding me of the lake that features in the book (although as I thought about it, I realized that the lake would probably be more of a deep dark blue, than green, especially in winter, when the book is set). I surrounded the focal with Czech glass beads in shades of blue and green, and added a small length of double chain in brass. It’s a simple piece but I think it captures the cool wintery colours of the book, and certainly the Celtic influences. What do you think? 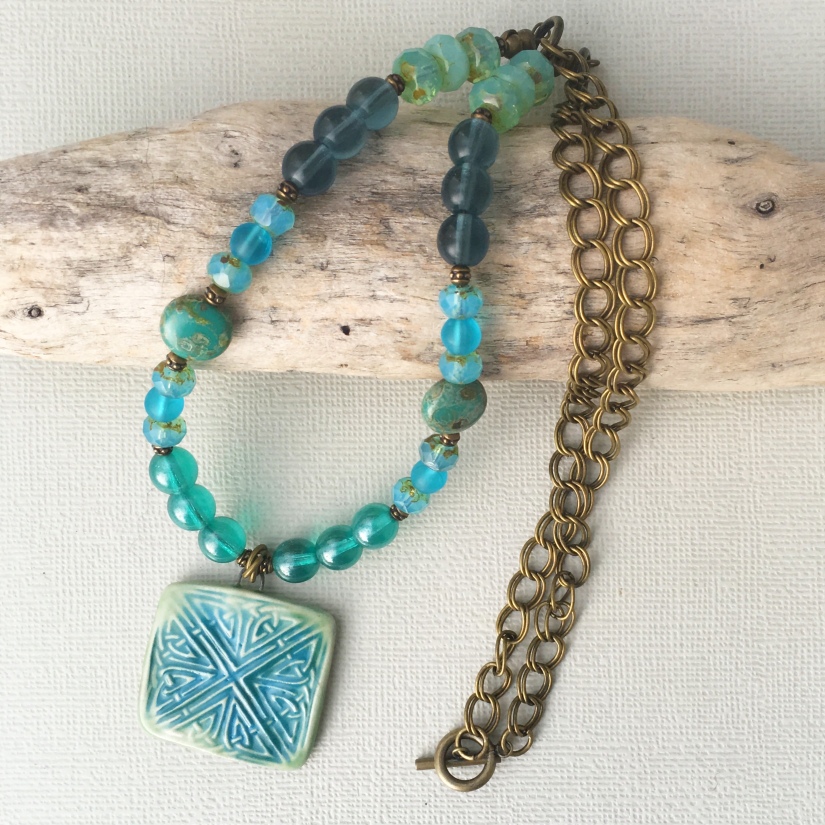 I really enjoyed the book and a couple of others I read by the same author. If you like a book that blends history, witchcraft, and yes, even a bit of romance, you’ll probably like them too. I’ll be seeking out a few more of Paula’s books in the near future. 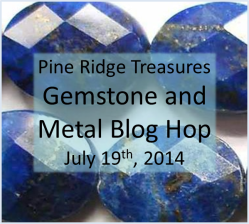 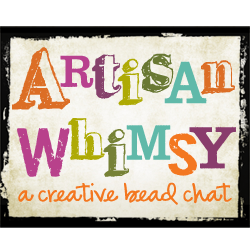 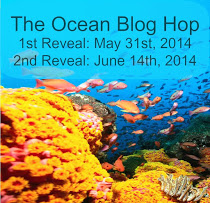 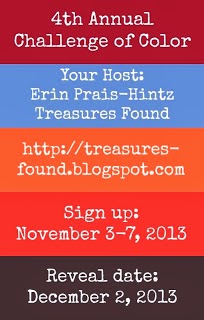 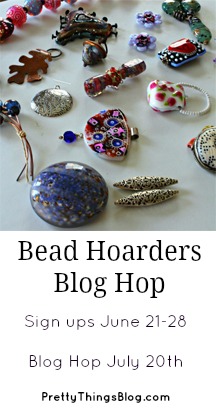 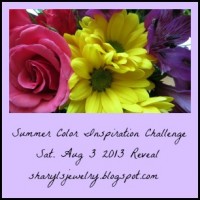 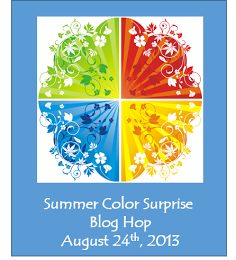 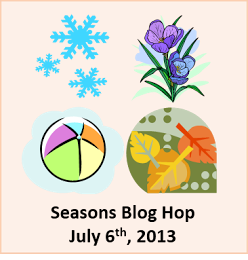 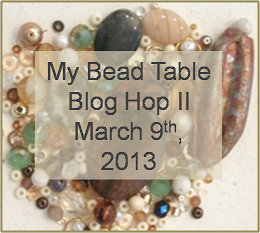 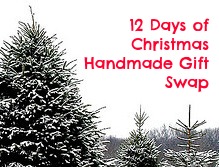 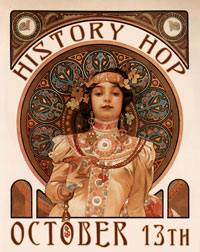